The colourful state of Madhya Pradesh oozes a vibrancy and liveliness that remain unparalleled. The bustling streets filled with frantic activity, the nooks and corners that are always animated are some of the images that are associated with the Heartland of India. The place offers a home for people of different religious backgrounds and ethnicity … END_OF_DOCUMENT_TOKEN_TO_BE_REPLACED 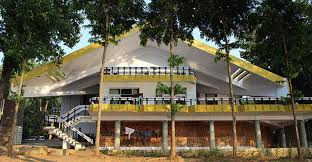 The colourful state of Madhya Pradesh oozes a vibrancy and liveliness that remain unparalleled. The bustling streets filled with frantic activity, the nooks and corners that are always animated are some of the images that are associated with the Heartland of India. The place offers a home for people of different religious backgrounds and ethnicity and this contribute to the vivid cultural diversity, emergence of numerous religious festivals, fairs and cultural fiestas.

The place is synonymous with Tiger sightings, Jungle Safaris and the exotic flora and fauna that are spread across the expansive parks. Kanha, Pench and Bandhavgarh National Parks are frequented by visitors all the year round and always find a spot in the travel itineraries. Yet the hive of activity that animate Madhya Pradesh every few weeks are left outside the spotlight and travelers are hardly aware of them unless they time their visits around these festivals. The cultural hubbub of Madhya Pradesh presents a sight to behold with their flurry of activities that encompass and celebrate not only religious occasion but also mark various important days that contribute towards the history of the land.

Madhya Pradesh looks its best and exudes a certain charm during these times of the year when the festive feel lingers in the air. Following are a few of the most popular festivals that are celebrated with much pomp and gusto in the various cities of the state.

Held in the first weeks of February, the extravagant dance festival lasts almost 7 days every year. The festival is organised to pay a tribute to the Gods and Goddesses who were the original patrons of music and are thus held opposite the Chitragupta and Vishwanatha Temples in open-air stages. Dance forms ranging from Odissi, Manipuri, Bharatnatyam, Kathakalli and many more are magnificently displayed during these days paying homage to their respective states.

The festival that spans four days and based in Gwalior offers an excellent platform for music lovers from to showcase their talents in front of the world. The festival is organised to pay tribute to one of the first musical geniuses that India ever witnessed who elevated the status of folk music, Tansen. The performances are held under Tansesn’s tomb and present a splendid affair that is remembered long after the festival.

Navratri is celebrated across Madhya Pradesh in the months of September and October and as the name denotes, the festival spans nine days. It marks the triumph of Lord Rama over the demon (Ravana) and the grand festivities truly make the trip to MP worthwhile. From songs, dances, fairs, street stalls displaying a multitude of trinkets, the entire state hardly spend a night asleep during the Navratri Celebrations. If nothing else, let travel agents plan the trip around these times for you to witness the splendour of the bonfire which document the “destruction of Evil” by burning a giant effigy of Ravana.

Ujjain’s Kumbh Mela that is held once every twelve years is the perfect scenario to witness the devotional and religious significance that India has to offer. Attended by thousands of tourists from all over the world to take a dip in the holy river Shipra, the conglomeration of devotees truly leaves one awed. Kumbh Mela spans an entire month and during this auspicious month hundreds of under-priviledged people are fed, religious functions are held and fair are attended. The month long festivities indeed offer a spectacle that must not be missed.

A treat for the ears and the eyes, this cultural fest pays its respects to the poet Kalidasa and is held in the cultural hotspot of the state, Ujjain. The festival sees the assembly of poets, elocutionists and scholars from all over India who successfully inspire the audience with their exquisite performances. The festivities make the literature and art lovers’ dreams come true. Even the plays that are staged have socio-political resonances that remain true to the present conditions.

The team at i4u Travels not only creates the perfect travel itinerary catering to your specific preferences but also makes sure that you do not miss out on the cultural extravagances that the place has to offer. From booking hotels, pick-ups, drop-offs, suggesting convenient locations to dine to arranging for the much sought after Safari Rides in Kanha and Bandhavgarh National Parks, i4u Travels do not give you much reason to enlist additional help while planning the trip.

What are you waiting for? Come, soak in the festivities and spot a tiger or two.

6 thoughts on “Festivals and Fiestas: a.k.a Reasons To Visit Madhya Pradesh”